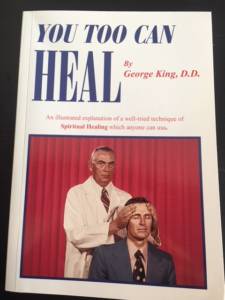 You Too Can Heal by Dr. George King, Jude’s master and spiritual healing teacher.

Jude The Healer works with Spiritual Masters and Avatars during his healing sessions with clients. Jesus was Jude’s first Master Teacher. Jude was raised Christian and was very close to his uncle, Bishop Mark Unegbu, a Catholic Bishop in West Africa. It was Jesus who led Jude to the United States and to Sir George King, with whom he studied spiritual yoga for 19 years. Sir George King introduced Jude to other Master Teachers and Avatars such as Lord Babaji, Yogananda, and other great Cosmic Masters.

Jude’s passion and decision to dedicate his life’s work to service for mankind was shaped by a blend of influences from his family’s Christian religious upbringing and a culture rich in the beliefs and practice of traditional African shamanism.

At first glance, these two spiritual belief systems seem to stand at odds with each other.   In fact when Jude’s uncle, Bishop Mark Unegbu, brought Christianity back to their Nigerian village when Jude was a teenager, initially it was met with resistance from his grandfather, a native shaman in their village.  For the previous 3 generations, the predominant spiritual belief system was African shamanism, practiced by the native doctors (known in their native language of igbo as the “Dibia”).

When his Catholic priest uncle returned to their village one day with an Irish priest after a trip to Ireland, spreading the word of Christianity, his shaman grandfather did not understand at first.  His uncle Bishop Unegbu showed his father (Jude’s Grandfather) a picture of Jesus, and said he was the son of God, and we must follow him as he’s teaching humanity how to be Christian.  His grandfather took his hand, led him outside and pointed at the sun, “This is God” he said.  “Jesus is the son of that God”.

Soon after, most of their family and the village had adopted the practice of Christianity, yet the tradition they’d always known persisted.  Jude’s grandfather continued to be a native shaman helping to cure various ailments of those in their village.

Jude’s grandfather was a profound influence on Jude as a child.  He strongly believed that the sun is the closest to what we know as ‘God’ because without it there is no life on the planet.  As Jude’s spiritual journey continued long after his grandfather’s death, this belief was later confirmed by Jude’s spiritual master Dr. George King.  Jude studied under Dr. George King for years to learn his method of advanced spiritual yoga healing techniques, and he was influential in helping Jude’s life purpose as a healer to become clear.